On the 10th March 2016 three meat plants along with several technology companies and stakeholders were gathered at Danish Crown in Horsens, Denmark to look at ways to reduce water consumption in swine-, cattle- and poultry slaughterhouses and, in joint action, identifying promising future projects.

The Danish Meat Research Institute, DMRI, in collaboration with Danish Crown and HKScan put effort into setting the stage, leaving no doubt which processes the slaughtered animals undergo throughout the meat plant. To paint the picture, the three companies brought Porkus the pig, Pollo the chicken and Bovino the cattle along as guides. 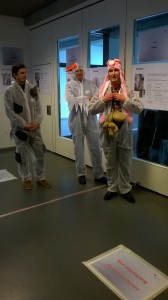